← Back to Press Releases & News

Norfolk, Va. – In August, a Clark project team anxiously watched as several members of the Naval Facilities Engineering Command (NAVFAC) toured the new P123 Bachelor Quarters at Naval Station Norfolk. The NAVFAC group, which included representatives from its Mid-Atlantic headquarters, project construction and design personnel, and Base Command, found several issues to discuss around the property. Were there too many seats in the courtyard? Are gray-tinted windows optimal for the facility? Are the fixtures and furnishings right for the layout of the bedrooms? It was a scene common to every construction site, but this time, there were no physical structures around. 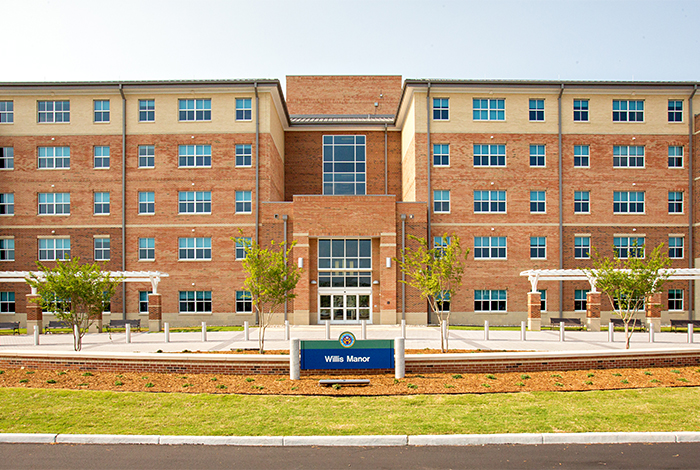 Following the tour, NAVFAC made some design and construction recommendations. Their feedback didn’t require any re-work and it wasn’t part of the punchlist process. Construction of the P123 Bachelors Quarters at Naval Station Norfolk, a 225-unit, market-style residence, has only just begun. The site tour was virtual, held in a hotel ballroom about 10 miles from where the piles for the project’s foundation were being driven. Clark’s project team, in conjunction with the company’s Research & Development group, turned the ballroom into a mobile BIM CAVE and led NAVFAC on an immersive three-dimensional walkthrough of their future facility.

With assistance from architect LS3P, vendor Mechdyne, Clark took the project’s three-dimensional Revit model into Unity, a video game engine. The graphics were brought to life using three largescreen projectors, 3-D glasses, and a to-scale avatar. The virtual walk-through was scheduled in conjunction with the team’s design review meeting, which gave NAVFAC and Naval Station Norfolk Base Command a preview of what lay ahead, helping them to make informed decisions.

Through the 3-D glasses, the tour began at the building’s front façade and followed the avatar inside. When the group reached the courtyard, Base Command personnel noted the excess number of chairs - an observation that would not have been made until after the building was complete. As the tour progressed toward the building’s two-story lobby, the NAVFAC team assessed the position of the exterior shade sails and settled on blue - not gray - tinted windows. Inside the building, the group toured two different residential units and evaluated each one’s layout and functionality.

NAVFAC officials found value in the virtual exercise. “People can interpret drawings differently,” said Tom MacDonald, NAVFAC’s Regional Housing Project Manager, “so it was Base Command [who will manage the completed facility] that benefited the most from the walkthrough. It was almost like giving them the keys at the beginning of the project. If there’s an issue, they can see it and have knowledge of it.” For example, Base Command personnel didn’t just notice an excess of chairs in the courtyard, they also noticed that none were bolted down, a potential hazard during hurricane season. Base Command personnel also were eager to see how the unit’s doors and drawers affected movement through the residences.

The immersive virtual walk-through is a new facet of Clark’s BIM services. The three-dimensional experience brings a project to life for clients and end users before ground is ever broken - leading to a more efficient construction process and a more functional finished product.

Clark Construction Group has broken ground on a new 24MW data center (VA6) in Ashburn, Virginia for NTT Ltd., a world-leading IT infrastructure and services company.

On Thursday, June 30, 2022, hundreds of small and diverse business leaders gathered with Clark executives, prime businesses, and certifying agencies to learn about upcoming opportunities and network.